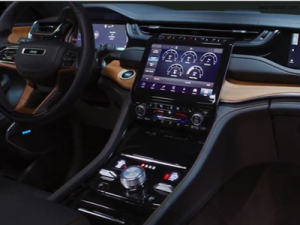 The verdict: A redesign that incorporates cutting-edge technology and standard advanced safety features is exactly what the aged Grand Cherokee needed.

With such a diverse range of trim levels, powertrains, and prices (even without designated performance models), the Grand Cherokee’s competition ranges from reasonably priced mid-size SUVs to established luxury players — and it competes with all of them.

New but not strange

According to Jeep, the new Grand Cherokee has all-new architecture: It’s longer, taller, and wider, with an even wider track. Non-PHEV powertrains remain the previous generation’s 293-horsepower, 3.6-liter V-6 and 357-horsepower, 5.7-liter V-8, but power for both is down a few horsepower. It’s barely noticeable, and the vehicle has lost over 300 pounds. When compared to some of its mass-market competitors, the Grand Cherokee still feels more substantial on the road, and the driving experience remains largely unchanged. Unfortunately, my seating position caused some forward visibility issues, as both the A-pillars and the rearview mirror interfered with my line of sight.

The V-8 engine in the Grand Cherokee isn’t quick, but it feels more than adequate—and it sounds great, with a nice, deep rumble. The eight-speed automatic transmission is responsive and quickly finds the best gear for the situation. Because of the rear-wheel-drive platform, handling characteristics are pleasant, if not sporty; other competitors use front-wheel-drive architecture and can be prone to understeer, even with optional all-wheel drive. The Grand Cherokee handles corners with ease, if not eagerness. Perhaps anticipation will be reserved for future performance versions to replace the previous generation’s SRT and 2021 Jeep Grand Cherokee Trackhawk trim levels, but none have yet appeared — and federal fuel economy standards and a shift toward electrification by Jeep parent company Stellantis may change what those versions look like.

In terms of fuel economy, even with what Jeep calls aerodynamic improvements in the name of efficiency for the new model, the V-8 Grand Cherokee remains a weak point. The EPA rates the V-8 at 14/22/17 mpg city/highway/combined, while the V-6 performs slightly better at 19/26/22 mpg. Surprisingly, that rating applies to both RWD and 4WD models. (On V-8 Grand Cherokees, four-wheel drive is standard).

The Grand Cherokee we drove had the top-tier Quadra-Lift air suspension, which now includes electronic semi-active damping. I’ve always found the ride in air-suspension-equipped Jeeps (and other Stellantis products) to be a little stiffer overall, but with better bump isolation and less body roll in corners than in coil-spring-equipped models, and that trend continues here. However, I would have preferred smaller wheels than the 21-inchers on our test vehicle because they created some impact harshness over road imperfections. 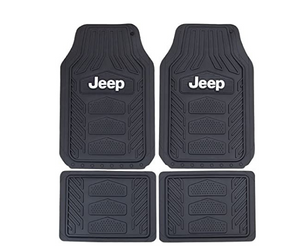 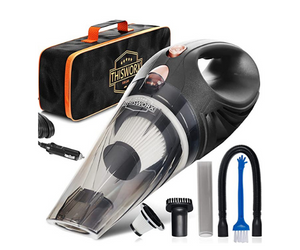 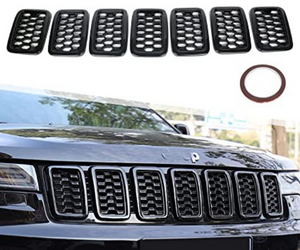 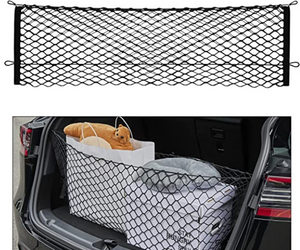 This is the pinnacle of luxury.

Being inside the Grand Cherokee Summit Reserve is mostly enjoyable—as long as you’re sitting near the front. The seats are wrapped in high-quality Palermo leather (not the Capri or Nappa leather found on lower trims), and there’s real wood and metal everywhere. In fact, there may be too much real metal: the metal rotary gear selector gets cold in the winter (and, presumably, hot in the summer). The 2021 Jeep Grand Cherokee Accessories also employs a number of phoney touch-sensitive controls, which are actually piano-black physical buttons with illuminated icons. While almost all of the controls feel high-quality, the fake ones sacrifice some quality for the sake of being physical controls—primarily because they’re made of plastic and other commonly used materials.

The massaging front seats added a nice touch of luxury. Another luxurious feature in our test vehicle was an optional 10.25-inch front passenger display, which allows the passenger to control the audio, watch videos on Amazon Fire TV for Auto, and navigate the system (and even send navigation to the main centre screen). The screen also has a privacy filter to prevent it from distracting the driver.

Even if its aesthetics don’t quite scream luxury, the 19-speaker McIntosh stereo was a delight to my ears; gothic fonts aren’t where it’s at. My main complaint right away is that the centrally located controls are occasionally at odd angles, and the piano-black background can make the button labels difficult to see.

However, the backseat of the 2021 Jeep Grand Cherokee Interior is still not the place to be. The seat is extremely low to the ground, resulting in awkward knee positions for occupants. To compensate, our test vehicle came with an almost $2,000 Rear Seat Video Group I Package, which includes rear passenger displays as well as Amazon Fire TV for Auto.

Overall, the 2021 Jeep Grand Cherokee interior of Summit Reserve’s  is as impressive as that of a more established luxury manufacturer. Will buyers of Audi, BMW, and Mercedes-Benz seriously consider a Jeep? They most emphatically should.

With this new generation, the 2021 Jeep Grand Cherokee Configurations have experienced two additional benefits: It received Uconnect 5, the most recent version of Stellantis’ infotainment system, as well as a slew of now-standard advanced driver-assist technologies that were optional in the previous generation.

UConnect 5 is user-friendly with clear and crisp graphics. It was mostly enjoyable to use on the larger 10.1-inch touchscreen of the Summit trim (an 8.4-inch touchscreen is standard on lower trims). I did experience some minor lag, and I couldn’t get my phone to connect to Apple CarPlay, either wirelessly (wireless Apple CarPlay and Android Auto are standard) or via a USB cable, at one point.

In terms of safety technology, Jeep is making adaptive cruise control, blind spot detection, forward collision warning with automatic emergency braking, and pedestrian and cyclist detection standard. Previously, features like these were only available on higher trim levels of the Grand Cherokee.

Minor driver-assistance features, on the other hand, were vexing. I quickly disabled a speed-limit warning that chimed for far too long when the vehicle’s speed exceeded the limit by just a few miles per hour. (Try driving in a city like Chicago while staying under the speed limit without upsetting your fellow drivers.) While alerts for things like school zones and red-light cameras are useful, the reason for those alerts’ chimes was hidden when using Apple CarPlay. I didn’t disable the warnings, but I shouldn’t have had to think about it.

In terms of actual safety ratings, the new Grand Cherokee has not yet been crash-tested by the Insurance Institute for Highway Safety or the National Highway Traffic Safety Administration.

The new Grand Cherokee is worth a look by luxury shoppers due to its overall improvement without sacrificing its strengths. The factors that made the Grand Cherokee I drove better than its predecessor are also present in lower trims, so there’s a new Grand Cherokee worth considering for all types of mid-size SUV buyers.

We will be happy to hear your thoughts